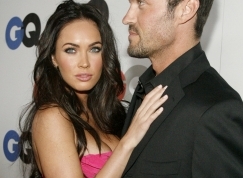 
Hollywood celebrities should be aware and get extra security to their houses. Within this month, many star homes have been mugged by the same high-profile gang of Hollywood thieves, who appeared to be teenagers.

According to OK! Magazine, the home of Beverly Hills 90210 star Brian Austin Green was robbed during the spate of star break-ins (victims included Lindsay Lohan, Audrina Patridge, Rachel Bilson, Paris Hilton and Orlando Bloom) that has recently dominated headlines - and the same group of criminals is suspected.

Authorities told TMZ that the burglars swiped numerous items - including Green's locked-up recreational gun and "several of Megan's (Megan Fox, who has also been robbed earlier, is Green´s girlfriend) signature t-shirts" - which have already been recovered and returned to Green. Shooting a film in New York, Green was allegedly unaware of the robbery.

Late last week, police in L.A. and Las Vegas took five suspects, all but one in the age of 18-19, into custody under suspicion of burglarizing the homes of Hollywood stars. Another person of interest, a 18-year-old high school classmate of others, is arrested in September for allegedly stealing $170,000 in jewelry and clothes from Lohan and Patridge.