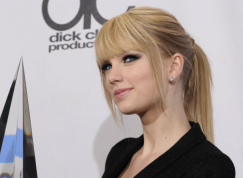 
Taylow Swift has been named Entertainer of the Year.

The 20-year-old country singer- who made her acting debut in 'Valentine's Day' this year - is the youngest-ever star to be given the honour by Entertainment Weekly magazine, who also paid tribute to the 2010 achievements of 14 other famous faces including James Franco, Kanye West, Katy Perry, John Hamm, and Ben Affleck.

In an interview to accompany her honour, Taylor - who is believed to be dating Jake Gyllenhaal and has previously romanced stars including Taylor Lautner and Joe Jonas - admitted thate she laughs at constant speculation as to which of her former lovers she writes about in her songs. She told the publication: "Sometimes I would laugh because I would see it in print and it would say, 'This song, which is written about her ex, so-and-so.' And they would write about it as if it was fact."The fact is, I haven't ever confirmed that any song is about any particular person. There's something kind of freeing about that. As far as I'm concerned, it's all still up in the air."

Taylor also spoke about why she decided to perform her song 'Innocent' - which is rumoured to be about Kanye - at the MTV Video Music Awards, a year after the rapper stormed the stage to protest to her being given an award ahead of Beyonce Knowles. She said: "I had decided that I didn't want to perform on the show. Or even go. Then I woke up in the middle of the night and I realised that I had to, and that I wanted to perform that song."