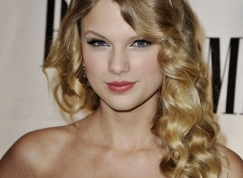 
Taylor Swift won a leading three American Music Awards, including Favorite Artist of the Year. She (19) gave her acceptance speech via satellite, paying homage to the night's other big winner, Michael Jackson.

"It's not just about the winnings, the awards," his brother Jermaine said in an acceptance speech. "It's mainly the message. The message Michael had will live on forever. He saw good in everyone. … Start with love and let's love each other."