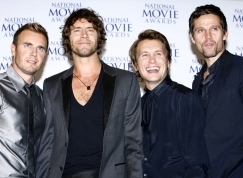 Take That are set to record the official World Cup song for the England soccer team.

The 'Greatest Day' hitmakers - Gary Barlow, Mark Owen, Jason Orange and Howard Donald - are in talks with the English Football Association to write a new anthem for the event, which takes place in South Africa next summer.
A source said: "Gary's really excited about it. He wants to make it a real belter that'll get the England fans on their feet.
"The Football Association have had approaches from lots of acts but Take That are the obvious choice."
If Take That do sign the deal, they will follow in the footsteps of New Order, the Lightening Seeds and the Spice Girls, who have all recorded and official song for the England team.

Robbie Williams training for Take That