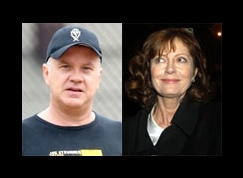 
Hollywood favourites Susan Sarandon and Tim Robbins have decided to part ways after more than twenty years together.

A representative for the couple, Teal Cannaday, said "Actress Susan Sarandon, 63, and her partner of 23 years, actor Tim Robbins, 51, have announced that they separated over the summer…No further comments will be made."

The couple, although never married, were together 23 years and were considered one of Hollywood´s most stable and lasting couples.  Although the news has just been announced, the couple split up in the summer.

Sarandon, most famous for her roles in Thelma and Louise and The Rocky Horror Picture Show won an Academy Award in 1995 for Dead Man Walking, Robbins won an Oscar for his supporting role in Mystic River in 2003.
The couple met on the film Bull Durham and were well known for their outspoken political views.