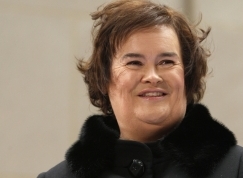 
Susan Boyle’s debut album I Dreamed A Dream sold almost 134,000 in 24 hours and is expected to sell nearly 400,000 copies this week. The 48-year-old singer is on track to have the biggest selling album of the year with her first record, which features a cover of Rolling Stones classic Wild Horses.

Miss Boyle has gone from unknown to international star in just seven months. ´I Dreamed A Dream´ is now almost guaranteed to top the album chart on Sunday, according to the Official Charts Company. Figures obtained by the Daily Mail show JLS have sold 28,260 copies of their debut album so far this week, while Leona Lewis has sold 24,094. Queen’s Absolute Greatest hits album is fourth having sold 20,233 followed by the Black Eyed Peas, whose record The End has sold 18,646 copies. The figures show Simon Cowell’s Syco arm of Sony BMG is dominating the album charts.

Miss Boyle was discovered by Britain’s Got Talent, while Leona Lewis won the 2006 series of The X Factor and JLS were runners-up last year. Cowell is the creative mastermind behind the talent shows – and he is likely to score further success next month.