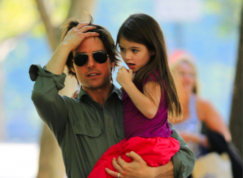 The actor and wife Katie Holmes always take four-year-old Suri with them when working and after traveling to countries including Japan , Brazil, Australia and England, the youngster has developed a fear of planes after constant moving between time zones severely disrupted her routine.

“Suri’s sleep patterns have been seriously disturbed from all the travelling. It’s why you often see her when she’s abroad being carried with a blanket as though she’s a baby,” a source said. “It has got to the stage where she screams whenever she sees a plane. It’s an open secret she doesn’t like flying and has trouble sleeping for days after she’s been on a flight.”

Suri reportedly made her feelings known to her parents during a recent trip to Prague, where Tom was scouting locations for Mission Impossible IV. “Suri kept saying, ‘Home now, home now.’ Suri’s a homebody and she’s not afraid to let everyone know,” the source said.

What did Tom Cruise give Katie for her 30th Birthday?