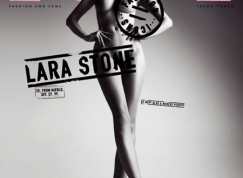 The Magazine which goes on sale next Monday also shows each model´s individual measurements.  Love Editor, Katie Grand stated, “For this issue of LOVE, we took eight women who are generally acknowledged as the most beautiful in the world, got them to show off their bodies - widely regarded as the most perfect in the world - and photographed them all in exactly the same position for the cover".

Grand went on to add, “We did this to show how much they differed physically from one another, which is why we also printed their measurements. The point is that ’perfection’ is not fixed, timeless or transcendent. It varies, as the measurements of our cover girls show.”

Each model has been photographed naked the exact same pose by photographers Mert Alas and Marcus Piggot and feature in a 40-page shoot.  Piggott added: "Each woman we photographed was special in their own way, and we thank them for that."