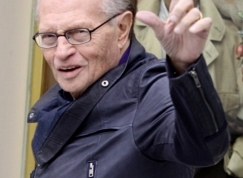 According to TMZ, Shawn left a handwritten note explaining that she’d overdosed on purpose, and even wrote that she wanted to be buried in Provo, Utah, which is where the OD occurred. Larry King's Wife Overdoses on Pills. As you may recall, Shawn’s father Karl Engemann is the one who found her the next morning, unresponsive. He insisted to the media that his daughter was not trying to kill herself.

But authorities say that was one of two handwritten notes they found on the scene. No details about the second note are available at this time. This is so sad. We hope she gets help. More details to follow…

UPDATE: According to the AP, Shawn is recovering at a nearby hospital. Radaronline is reporting that Larry didn't visit her for days after she overdosed.

UPDATE 2: A police report from Provo, Utah, lists the following eight prescriptions that Shawn's currently taking: Compro, Prometrium, Clonazepam, Ambien, Klonopin, Subutex, Cymbalta and Lyrica. According to police, all eight prescriptions believed to be filled within the last ten days, were found empty by her bedside. YIKES!

UPDATE 3: Larry just released the following statement: "Our marriage is still together, and I am staying very close to our children, who we love immensely. We shall go through this difficult time intact as a family."