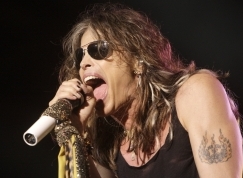 
After 40 years, the leadsinger of Aerosmith, Steven Tyler, has decided to quit the band and isn't on speaking terms with anybody.

Aerosmith's guitarist Joe Perry tells the Las Vegas Sun, "Steven quit as far as I can tell. I don't know any more than you do about it. I got off the plane two nights ago. I saw online that Steven said that he was going to leave the band. I don't know for how long, indefinitely or whatever. Other than that, I don't know."

Perry blames Tyler's lack of communication for the split. He added that the group will go on with or without Tyler. He adds, "Right now I'm adjusting to how we're going to go on. Aerosmith is such a powerful band, I mean it's like a steam locomotive. You just can't disregard 40 years of four guys who play together as well as they do. We're just trying to - at least I am - trying to figure out what direction the band should take.

"As far as replacing Steve, it's not just about that, it's also four guys that play extremely well together, and I'm not going to see that go to waste. I really don't know what path it's going to take at this point, but we'll probably find somebody else that will sing in those spots where we need a singer and then we'll be able to move the Aerosmith up a notch, move the vibe up a notch."

U2 Has Highest Ticket Sales of the Year (3)