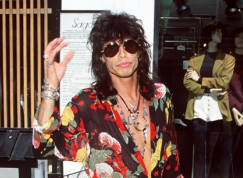 
Steven Tyler will release a solo single in November.

The Aerosmith singer has written and recorded 'Love Lives', as the theme tune for the upcoming Japanese movie 'Space Battleship Yamato.' Four versions of the song - which the 62-year-old rocker wrote after receiving a video of the film's final battle scene and a complete script translated to English - will be available including the original, alongside acoustic, piano and instrumental versions.

News of Steven's solo single comes after the future of Aerosmith has been put into further question after guitarist Joe Perry slammed the singer's decision to take on a judging role on TV talent show 'American Idol.' Joe said: "'American Idol' is one step above 'Teenage Mutant Ninja Turtles'. I'll tell you one thing, when we put this band together, this is not something that Steven Tyler would do."

However John Kalodner - who worked with the rockers during their hugely successful 1980s comeback - hit back, accusing Joe of jealousy and saying the band could not survive without their frontman. He said: "Joe is completely wrong. It's jealousy. He's ultra p****d off. If Tyler makes a giant success as a TV personality, he won't want to go back on the road. And there is no Aerosmith without Steven Tyler. Period."

Rumours of Steven quitting the band have been abound since last November, when it was reported he had failed to contact his bandmates for a month and was planning on concentrating on 'Brand Tyler'. The rest of the band even went as far as to look for a new vocalist to replace the flamboyant star and in December last year he checked into a rehab facility for an addiction to painkillers, though he has since announced his successful recovery.