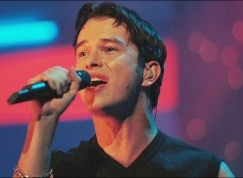 Boyzone singer Stephen Gately was dressed in a typical Boyzone sharp suit and his favourite  specially-made red trainers as he made his final journey yesterday. Partner Andrew Cowles and Stephen’s mother Margaret had lovingly chosen the outfit. The trainers were a must. Custom-made by Nike, they had been given to Stephen just two weeks before his death.

He loved the black hand stitching. His nickname “Steo” was inscribed into the left trainer and “Gately” the other.

“Stephen adored them and had worn them every day since. They were a must when Andrew got to thinking about how Stephen would want to be dressed,” said a family friend to Mirror UK.

“Stephen had talked of nothing else for weeks. They were his latest fad and he’d have wanted them with him. That was Stephen all over – childlike, in the sweetest possible way.”

His quirky sense of humour was evident too in the gifts carefully chosen by friends and family and left with the coffin as part of the offertory procession during the funeral mass.

They included a pair of Mickey Mouse ears because he had a lifelong love of everything Disney, and a tub of his favourite La Prairie moisturiser, which he insisted on using twice a day.

33-year-old Gately died last week during a holiday in Mallorca.