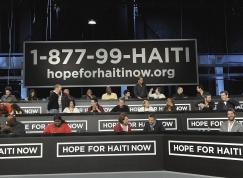 
Hollywood's biggest stars got together yesterday to raise money for victims of the earthquake in Haiti during a telethon hosted by George Clooney.

Jack Nicholson, Daniel Day-Lewis, Ben Affleck and Mel Gibson manned a bank of telephones in Los Angeles, while tens of millions of TV viewers were treated to a string of performances and appearances by Madonna, Justin Timberlake, Jay-Z, Rihanna and Bono.

Alicia Keys kicked off the telethon with a performance of her hit Prelude to a Kiss, before Chris Martin from Coldplay teamed up with good pal Beyonce to perform her song Halo. Bruce Springsteen followed Keys with a rendition of his song We Shall Overcome; Sheryl Crow, Kid Rock and Keith Urban sang Lean on Me; Madonna performed Like A Prayer; Justin Timberlake and Matt Morris covered Leonard Cohen classic Hallelujah and Jennifer Hudson belted out Let it Be.

Speaking to MTV after the event, Clooney said, "I hope we made some money out of this. The only way to make this a success is to make a considerable amount of money."

Stars have already donated millions of dollars to victims of the Haiti earthquake. If you want to help too, visit Hopeforhaitinow.org

Be part of something bigger! Donate to Ocean’s Clinic Africa Relief Camp 2018 Campaign