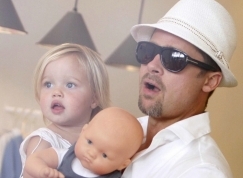 Want to have Ben Affleck’s baby? While that appears to be the exclusive domain of Jennifer Garner, women can now at least give themselves a fighting chance of having a child who looks like a movie star, sports hero or world leader.

A Southern California sperm bank has taken to matching its donors to the celebrities they most resemble, putting an actual image to a process that previously had prospective parents sort through an often confusing jumble of printed characteristics, from ethnicity to eye color.

It’s easy for a woman (or a man, in the case of a gay couple exploring having a child through surrogacy) to scroll through the cryobank’s Web site and find a donor who may look like the pinup poster they once had in their bedroom.

So, while Brad Pitt is already taken by Angelina, parents who want a handsome baby boy will now have that opportunity.