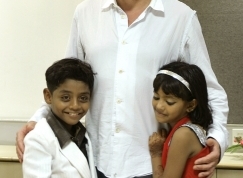 "We were in Mumbai last week and we were very clear that the attendance of the kids at school was not good enough," said the Oscar-winning director. "They've had a lot of distractions."

During his visit Boyle says he insisted that "unless school attendance improves, then everything else is jeopardized, because that was the whole starting point of the way the film could benefit the kids."

Boyle said the whole point of the child stars' trust is to "set them up so that they wouldn't feel like prisoners within their economic cycle which wasn't very helpful to them, that they would have a bit of an ability to step out and make some decisions about their own life and to back it with a bit of cash and a nice education and a place to live, things like that."