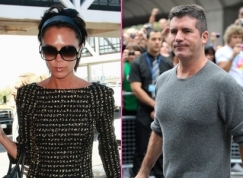 
Simon Cowell, who created and launched THE X FACTOR in the U.K. in 2004, will serve as both Executive Producer and judge on the U.S. version, which will be produced by Syco Television and FremantleMedia North America.

And of his departure from American Idol; Cowell said that the show will be fine without him - particularly if Ryan Seacrest takes over his position as judge of the popular show,  “It’s like having a good player in a good football team. The two have to work together and when the player retires, the football team will continue to be successful. We made sure that when we did this, American Idol was going to be protected."

"I’m going to suggest that Ryan does it [replaces Simon as American Idol judge] then he can present and judge the show. He can just jump off the stage into the judge’s chair and back again!"

“What’s important is to get somebody who knows what they’re talking about – we want to find talent. I’m doing The X Factor in America because I believe I can find somebody incredibly talented through this process.

“America has thousands of talented people just waiting to be discovered, and that’s why we are doing this show. I want to find a star at the end of it.”