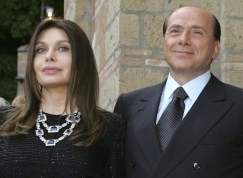 
Italian Prime Minister Silvio Berlusconi faces losing a slice of his 5,5 billion euro business empire in the form of a divorce settlement to his estranged wife.

Veronica Lario, who began divorce proceedings against her 73-year-old husband earlier this year, has reportedly hired experts on inheritance and business law in the run up to the court battle. Mr Berlusconi's business interests include newspapers, three TV stations, a publishing house and an insurance and investments firm.

The legal process for divorce proceedings in Italy is complicated and can last up to seven years, including a formal separation of at least a year. Veronica was Silvio´s second wife, they got married in 1990.