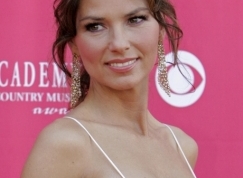 
First came heartbreak, then a second chance at love. Next up for country superstar Shania Twain her own TV series.

Shania Twain, 44, will star on Why Not? With Shania Twain, an hour-long series premiering on OWN: The Oprah Winfrey Network. "The show will follow [Twain] as she begins her climb back to the top, a personal journey filled with risk, revelations and unexpected adventures," says a statement from the network.

This won't be Twain's first foray in front of the camera since her marriage to Robert "Mutt" Lange fell apart in May 2008 over his relationship with her then-friend – and employee – Marie-Anne Thiébaud.

The country singer has posted several personal videos on her website in recent months, chronicling her world travels, fun times with her son Eja, 8, and her blossoming romance with her boyfriend Frederic, who is Thiébaud's ex-husband.

In February, Twain, who has recently been seen in New York, posted a video – shot in Canada by Thiébaud – in which she visits a radio station, jokes about her junk-food cravings and the effect of the cold weather on her skin, and banters with her Swiss-born beau, whose French-inflected voice can be heard throughout.

Last August, she posted a video travelogue documenting a skydiving trip in Florida, a camel-riding adventure in Egypt and a bike ride through a London park with Thiébaud, whom in an accompanying letter she called her "most constant companion."