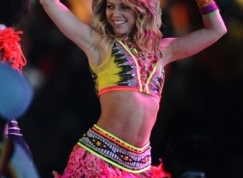 
The sight of Shakira splashing around in a fountain is not the kind of thing that would upset most people. If anything, the opposite is the case.

But spoilsport officials in Barcelona have seen the Colombian singer shooting her new video and they are not happy about it. After seeing YouTube footage of her dancing in the famed Pla de Palau fountain with fans and riding on the back of a Harley Davidson motorcycle without a helmet, Shakira, 33, could face fines from the health and safety brigade.

Shakira is in the Spanish city filming her latest music video for the track Loca, but fans who witnessed the fountain frolicking posted videos online. One city council member pointed out that Shakira 'did not even ask permission to film' in the landmark and could be fined as a result. The authorities will assess the video and could punish 'those responsible.'

'When asking for permission in Barcelona, you can take this kind of footage without problems,' the council member added. 'We will analyse the images to detect infringements that have been committed during the recording of the spot.' Shakira was also pictured zooming about the city on the back of motorbike without mandatory head protection. The council has complained that Shakira 'does not lead by example' being 'a public person.'

Shakira Has No Plans To Marry - Despite Being Engaged!

Shakira Raises $660K To Build Schools In Colombia And Haiti