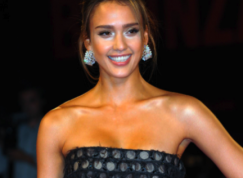 
If you needed a few reasons to go and see Machete I can think of a couple. Danny Trejo threatening Arizona with violence, Cheech Marin kicking ass as a catholic priest, Michelle Rodriguez looking hot in leather, Lindsay Lohan playing herself and last but not least a brief shot of Jessica Alba in the shower.

Machete is now playing and is the must see movie of the year for fans of GrindHouse and Robert Rodriguez. Fun factoid in the photos below Jessica Alba is wearing some sexy under garments but in the movie the producers air brushes them out so she is naked. Will you notice the difference or care? No you won't. Gotta love the magic of movies!

Watch the real photos of the scene here

and the nude scene photos after the airbrushing here!