Second Woman Claims to Have Had Affair With Tiger 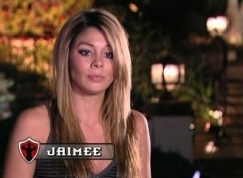 
Another woman has come forward claiming she did the nasty with Tiger. A Los Angeles cocktail waitress named Jaimee Grubbs claims she's been having an affair with Tiger for 31 months!

Grubbs claims she started her affair with Tiger back in April 2007 and she's had over 20 sexual encounters with him. And if that's not bad enough, she claims to have 300 racy texts from Tiger as well, reports Us Weekly.

Tiger married his wife Elin Nordegren back in 2004 so we're sure she's not going to be too thrilled about Grubbs' "20 sexual encounters" claims. As Hollyscoop had previously reported, Tiger and his wife Elin had reportedly gotten into an argument right before his car accident Friday morning.

Rachel Uchitel, who was first accused to have an affair with Woods, not only insists there isn't a shred of truth to reports – she's ready to take a lie-detector test to prove it.