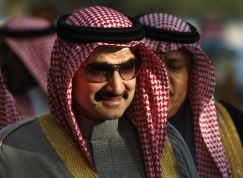 The royal - who is the chairman of the Kingdom Holding Company (KHC) - has topped the rich list for the sixth year running with his $18 billion fortune. Despite the current financial climate, the 54 year old has reportedly seen his wealth rise by almost $1 billion over the past year. While his 94 per cent shares in the investment company - which is the largest business in the Arabic country - dropped slightly over the past 12 months, the prince's other assets rose steadily in value.

The royal's wealth is also made up of his lavish jewellery collection, his stake in a French port and his investments in companies in both Lebanon and Palestine.

According to the journal Arabian Business, his wealth also comes from his investment in an engineering consultancy business, worth almost $12 million, other business stakes worth $560 million, and property with a value of $3.18 billion.

The extravagant royal also has a deluxe collection of transportation vehicles, including the world's first private super jumbo jet.

Earlier this year, he was named the 22nd richest person in the world by Forbes.