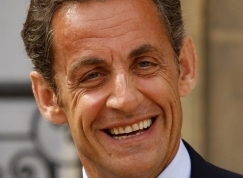 
French President Nicolas Sarkozy became a grandfather on Wednesday when the wife of his son Jean gave birth to a baby boy, officials said.

"Yes, he had a grandson this morning," said a presidential aide, who went on to say that he had been given a "very unusual" name.

Sarkozy's 23-year-old son Jean married Jessica Sebaoun, heiress to the big electronics company Darty, in September 2008 and the couple announced last year that they were expecting their first child.

A parliamentary official said the boy was named Solal, from the 1930s novel by the same name written by Swiss author Albert Cohen.