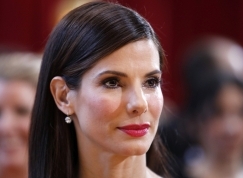 
The FBI reportedly investigated a murder plot against Sandra Bullock. The scarier part is that the plot was allegedly arranged by Jesse James' loco mistress Michelle 'Bombshell' Mcgee.

Thankfully, the FBI deemed the tip "not credible."  TMZ reports that about two weeks ago, McGee's ex-husband Shane Modica, claimed that he had received a call from a man in Missouri who claimed that McGee wanted to put a hit on her ex-husband and Bullock.

Modica claims that the person who called claimed that he received his killing orders before the Jesse James/Sandra Bullock cheating scandal became public.

The dude from Missouri then contacted his local FBI office to tell them about the hit. The FBI apparently had prior run ins with this guy who has apparently had a head injury which has caused him to "lose sense of reality."  The FBI looked into the threat and deemed it bogus.