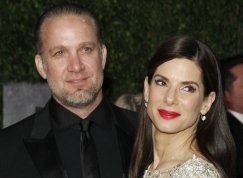 
Sandra Bullock has reportedly left the home she shared with husband Jesse James following rumors that he was unfaithful to her.

People magazine reports that Sandra packed up her bags and left the home on Monday, just days before Jesse's alleged scandalous affair went public. According to reports, he was unfaithful to Sandra while she was away shooting The Blind Side, the movie she just picked up a Best Actress Oscar for.

Tattoo model Michelle ‘Bombshell’ McGee claims she had an affair with Jesse, but only because he insisted that him and Sandra were no longer together. "I would never have hooked up with him if I thought he was a married man. He gave me the impression they were separated," she told In Touch magazine.

A source told OK! magazine: “Sandra is devastated. Jesse has tried to smooth things over with her, but to no avail. She’s still leaving him.”

Sandra canceled her appearance for the London premiere of The Blind Side to deal with this personal issue.

Sandra married the motocycle builder and Monster Garage host in 2005.