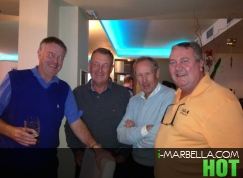 
On Monday, on the 10th of December, Jeremy Thompson was spotted with friends enjoying a beer at El Rincón de La Sala, San Pedro, Marbella.

The Sky News presenter is one of Britain’s most experienced television newsmen, Jeremy has been a correspondent for Sky News, the BBC and ITN, covering many of the major news events of our time. He has reported from nearly 100 countries around the globe and has run the foreign bureaux in Asia, Africa and the USA.

Among the awards received for his work are an Emmy from the US Academy of TV Arts and Sciences, three Gold Medals for Best News Reporter from the New York TV Festival, and the Royal Television Society award for Sky’s coverage of the Kosovo conflict. He was named RTS Presenter of the Year in 2006.