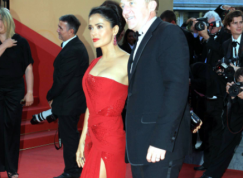 The sexy actress wed the French billionaire — who’s the father of her two-year-old daughter Valentina — in February 2009. And Salma insists that although she and François don’t live together, they’re happier than ever.

“I knew we had a good relationship, I just didn’t ever feel the need to get married,” she said. “What I wanted was a partner who I could get old with and have children. It is nice being married now but in the end a marriage certificate does not make any difference. I just accept the living arrangements. Of course it would be nice if we could be together more often. But our marriage works this way — it doesn’t fit the common rules. But why should I question it because of that? Francois doesn’t — he gives me the space I need. But he always supports me, when I need him.”

The Duchess of Alba weds her third husband