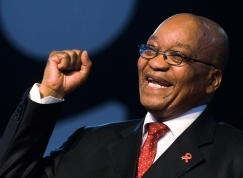 
South African President Jacob Zuma is set to marry his fifth wife in a traditional ceremony at his rural village in the province of KwaZulu-Natal, the presidency said in a statement Sunday.

"The traditional wedding of President Jacob Zuma and Tobeka Madiba tomorrow, 4 January, is a private family ceremony," said the statement.

Monday's wedding ceremony will be the traditional one where the bride Madiba will be introduced to the elders as well to the ancestors, two years after Zuma paid the Ilobolo (dowry).

Madiba, 37, who has two children with 66-year-old Zuma, has attended official functions as one of the country's first ladies and has been quoted in the media as Thobeka Madiba-Zuma.

Polygamy is legally recognised in South Africa. Zuma is also reportedly preparing to take on a sixth wife.

Visit to the UN Earth Headquarters in South Africa