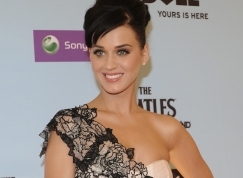 
Congratulations is in order for Russell Brand and Katy Perry! The couple is reportedly engaged! According to the Daily Mirror, Russell popped the question last week and that they’re thrilled to be taking their relationship to the next level.

A source close to the publication says, “Russell knows Katy’s the one for him.He’s never been into a girl like he has with her and they’re besotted. He asked her to marry him last week and she quickly said yes.”

But apparently the biggest hurdle will be finding time for the actual nuptials. The insider says, “They don’t know when the wedding will be but they are planning to make it in 2010 if the schedules can work.”

We also hear Russell purchased a new home for his fiance. X17 reports that Russell bought a $3.2 million home in Los Feliz, and that it conveniently has four bedrooms so they can start a family! These two move fast!