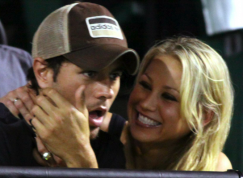 Dios mio! Word on the street is that Enrique Iglesias and Anna Kournikova have caught the Hollywood baby fever, and are expecting their first child together!

X17Online was first to report the possible baby news today, saying the couple recently announced the shocker to a small group of their friends.

According to the report, Enrique and Anna had some friends over to their home in Miami and spilled the big news. Their reps have not confirmed nor denied the rumour, but Enrique is always notoriously private, so we’re betting it’ll be a while til they say anything!

Recently Hollyscoop spoke with the singer about the possibility of having children and h responded with a big fat “NO."  He added, "Not right now, I love kids…but no. If I ever had kids I would like to keep it a secret,” he added.