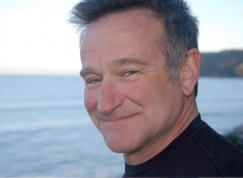 
The Oscar-winning actor and comedian who committed suicide was 63 years old.

According to police in Marin County, Calif., Williams was found "unconscious and not breathing" just before noon Monday inside his home in Tiburon, Calif., following a 911 phone call. He was pronounced dead at 12:02 p.m. after emergency personnel arrived. They added that the actor was last seen alive at 10 p.m. Sunday.

An investigation into the cause of the death is underway, but "the Sheriff’s Office Coroner Division suspects the death to be a suicide due to asphyxia." A forensic examination is scheduled for Tuesday, along with a press conference that will be held at 11 a.m. in San Rafael, Calif. Williams' publicist Mara Buxbaum told The Hollywood Reporter that Williams "has been battling severe depression of late. This is a tragic and sudden loss. The family respectfully asks for their privacy as they grieve during this very difficult time."

His wife, Susan Schneider, said: "This morning, I lost my husband and my best friend, while the world lost one of its most beloved artists and beautiful human beings. I am utterly heartbroken. On behalf of Robin's family, we are asking for privacy during our time of profound grief. As he is remembered, it is our hope the focus will not be on Robin's death, but on the countless moments of joy and laughter he gave to millions."

Added David Steinberg, his manager of 35 years: "Nobody made the world laugh like Robin Williams.

My brother, my friend, my soulmate, I will miss you."

Williams, a four-time Oscar nominee, won a supporting actor Oscar for Good Will Hunting for his portrayal of a wise and morose psychologist. He most recently starred in CBS' comedy The Crazy Ones, which lasted only one season. He was nominated for a People's Choice Award for his role as an advertising executive on the comedy, in which Sarah Michelle Gellar played his daughter.

Crazy Ones production company 20th Century Fox TV said in a statement: “Robin Williams was a comedy giant, and although we only knew him personally for a season, he was warm, funny and a true professional. His cast and crew both loved him and loved working with him, and our hearts go out to his family and friends. He was one of a kind.”

Creator David E. Kelley said: "The talent was legendary. But equally inspiring, perhaps more so, was his kindness and humanity. A gentle soul who touched us all. A very special man, and our hearts are broken."

Added CBS: “Our world has lost a comic genius, a gifted actor and a beautiful man. We will remember Robin Williams as one of the unique talents of his time who was loved by many, but also as a kind, caring soul, who treated his colleagues and co-workers with great affection and respect. Our heartfelt thoughts and sympathies go out to his family, loved ones and friends.”

Williams also recently starred in the feature Angriest Man in Brooklyn opposite Mila Kunis, Melissa Leo and Peter Dinklage. His next project is the feature film Night at the Museum: Secret of the Tomb, the third film in the trilogy, which is set to hit theaters Dec. 19 via 20th Century Fox.

Said the studio in a statement: "There really are no words to describe the loss of Robin Williams. He was immensely talented, a cherished member of our community, and part of the Fox family. Our hearts go out to his family, friends and fans. He will be deeply missed.”

Said SAG-AFTRA president Ken Howard: "I am deeply saddened to hear of Robin Williams' death. He was a performer of limitless versatility, equally adept at comedy and drama, whether scripted or improv. With his incomparable manic style, he could appeal to adult sensibilities in a stand-up comedy routine or elicit giggles from children as the voice of Genie in Aladdin. Outside of his career, he used his considerable talents to raise money for charity. He was not only a talented man, but a true humanitarian. It's such a tremendous loss."

Williams recently checked in to a renewal facility affiliated with the 12-step program in a move to focus on his ongoing sobriety. The actor has been open about his issues with drinking and cocaine during the early 1980s and sought treatment in 2006 for alcohol abuse.

"[Addiction] waits. It lays in wait for the time when you think, 'It's fine now, I'm OK.' Then, the next thing you know, it's not OK," he told Diane Sawyer in an interview on Good Morning America at that time. Hollywood mourned the actor on Twitter after news broke Monday afternoon.

The full statement from Marin County police, released Monday, is below.

On August 11, 2014, at approximately 11:55 a.m, Marin County Communications received a 9-1-1 telephone call reporting a male adult had been located unconscious and not breathing inside his residence in unincorporated Tiburon, CA. The Sheriff’s Office, as well as the Tiburon Fire Department and Southern Marin Fire Protection District were dispatched to the incident with emergency personnel arriving on scene at 12:00 pm. The male subject, pronounced deceased at 12:02 pm has been identified as Robin McLaurin Williams, a 63-year-old resident of unincorporated Tiburon, CA.

An investigation into the cause, manner, and circumstances of the death is currently underway by the Investigations and Coroner Divisions of the Sheriff’s Office. Preliminary information developed during the investigation indicates Mr. Williams was last seen alive at his residence, where he resides with his wife, at approximately 10:00 pm on August 10, 2014. Mr. Williams was located this morning shortly before the 9-1-1 call was placed to Marin County Communications. At this time, the Sheriff’s Office Coroner Division suspects the death to be a suicide due to asphyxia, but a comprehensive investigation must be completed before a final determination is made. A forensic examination is currently scheduled for August 12, 2014 with subsequent toxicology testing to be conducted.