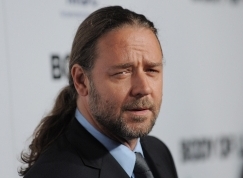 The story follows an archer (Crowe) in the service of King Richard the Lionheart who eventually became known as Robin Hood, the famous archer and outlaw of English Folklore. Beginning after the Death of King Richard at the Siege of Chalus Chabrol, the film follows Robin on his rise to infamy among the English Barons and the newly crowned King John.

The film also stars Cate Blanchett as Maid Marion, and Mark Strong as Sir Godfrey. The movie hits theaters May 2010.

Check out the trailer below! What do you think of Russel as the king of the thieves?