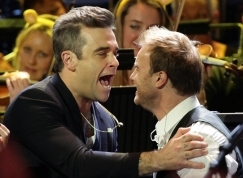 
Robbie Williams was in tears before he joined Take That on stage in an emotional reunion with the boyband he left 15 years ago.

Their fans have been waiting for years for the group to reunite with Robbie, but their prayers were only half-answered last night. Take That opened the Children In Need concert at the Royal Albert Hall last night, which had been organised by Barlow, and sang Greatest Day dressed in smart dinner suits.

The moment fans had been waiting for came as Barlow introduced Robbie on stage saying: 'What a perfect night for us to introduce an old friend.' An emotional-looking Williams appeared on stage and hugged each of his former bandmates in turn, including newlywed Mark Owen.

But despite feverish speculation beforehand, Williams and his old bandmates didn't actually perform together as a standalone group. Fans screamed in anticipation of them singing an old Take That number together, but the boys left him onstage to perform his solo singles Bodies and You Know Me.

He said afterwards that he was welling up before going on and wanted to 'milk' the moment for a bit longer. It was the first time they had appeared together on stage together since he left the band in 1995.

Robbie Williams training for Take That