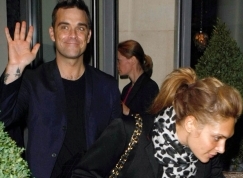 The 35-year-old singer was being interviewed on Sydney station 2DayFM when it emerged his girlfriend Ayda (30) was also in the studio. The show's co-host Jackie Henderson - known as Jackie O - mentioned the city was famed for celebrity proposals and asked if Williams "had anything to share".

The interviewee played along, turning to Field and asking: "Is there anyone you want to get married to?" Williams then went for a more direct approach, saying: "Ayda Field, I love you so much .... will you marry me?" Field, who is an actress, replied: "Yes, I'll marry you."

The public proposal does not come as a huge shock after the singer had regularly spoken of his hopes of marriage in recent interviews. The date of the forthcoming wedding remains unknown.

Robbie Williams gets a pre-nup