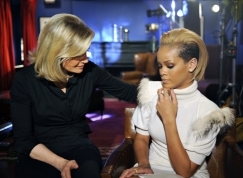 
R&B singer Rihanna broke her silence on Friday about the night her ex-boyfriend Chris Brown attacked her, saying he had bitten her, put her in a headlock and left her bleeding and swollen.

"It wasn't the same person that says 'I love you.' It was not those...eyes," Rihanna (21) told in an interview on ABC television's "Good Morning America" show.

"He had...no soul in his eyes. Just blank...He was clearly blacked out. There was no person when I looked at him," she said.

Singer Chris Brown (20) was sentenced to five years probation and 180 hours of community service for the assault in February on the eve of the Grammy Awards. He has apologized publicly and although the pair briefly reunited, Rihanna said she now has "no desire at all to be with him."

Rihanna said the attacks started with an argument over a text message Brown received while they were driving home from an industry party.

She acknowledged police reports that Brown bit her, put her in a head lock until she had trouble breathing, and punched her several times in the eye. Her screams prompted a passer-by to call the police.

"I was bleeding, I was swollen in the face," she said. "So there was no way of me getting home, except for, my next option was to get out of the car and walk. Start walking in a gown, in a bloody face. So I really don't know what my plan was."

Rihanna said although her wounds had long healed, she had flashbacks and scars inside.
"The thing that men don't realize when they hit a woman, it's...the face, the broken arm, the black eye, it's going to heal. That's not the problem. It's the scar inside."