Rihanna Could See Herself With a Girl 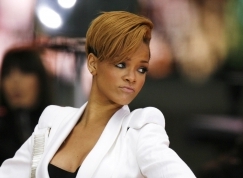 
Good Girl Gone Bad Rihanna is already a sex symbol for all men, but the singer says she's open to a romance with a girl.

Rihanna famously split from boyfriend Chris Brown back in February after he beat her. She's been single since the split, but she's not ruling out a relationship with a woman--and she has her sights set on Megan Fox.

Rihanna said, “All humans are born with the ability to be attracted to both sexes. I mean, I could see myself in a relationship with a girl.”

Meanwhile, Rihanna says she would love to branch out of music and try her hand at acting. "I’d love to be an assassin. Either that or a lesbian. Maybe both! Hey, a gay assassin, there’s nothing hotter than that. Megan Fox would play my girlfriend — hands down. She’s yummy. She’s hot," she added.