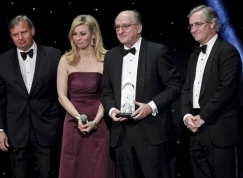 The head of the Spanish oil company Repsol, Antonio Brufau was honoured for his strategic vision and leadership in maintaining and promoting the company’s successful growth while managing the fallout from the confiscation of its Argentinean off-shoot YPF in April 2012.

Brufau was selected from nearly 200 nominations by a committee of industry experts.  Platts highlighted the transformation registered in Repsol in recent years, during which it has become a world leader in exploration and has made five of the most important hydrocarbon discoveries in the world.

In addition, the company has recently developed the largest industrial project in Spain, which has placed its downstream area at the forefront of European refining systems.

In 2004, Repsol was awarded the “best engineering project of the year “for the technology developed for the Prestige oil recovery, also recognizing its solidarity and altruism, despite not having any relationship with the ship or its cargo.