Reese and Jake broke up 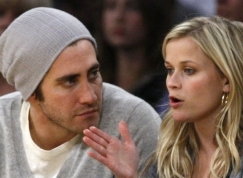 Jake was devastated. A source said: "It broke his heart. She felt pressured to wed again but she wasn't ready. She couldn't give Jake enough and she got cold feet. Jake wanted all of her."

Reese - who has two children, Ava, 10, and six-year-old Deacon, with ex-husband Ryan Phillippe - is also said to have had doubts over Jake's suitability as a stepfather. A source told Us Weekly magazine: "She really worried that they didn't have enough in common. When she was giving all of her energy to Jake, she felt like she wasn't giving her kids enough. He was great with the kids, but she felt like he didn't get the whole scope of what that entailed."

The couple ended their relationship earlier this month, but insiders insist the split was amicable and nobody else was involved.

Reese Witherspoon Buys Steven Seagals House for How Much?