Ralph Laurens´ anorexic-retouched model was fired for being fat 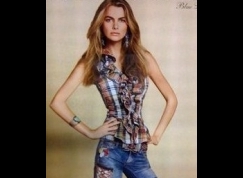 
The model who was digitally touched-up to look super skinny in a Ralph Lauren advert today claimed she was fired by the firm for being too fat.

Filippa Hamilton is the 8st 8lbs (54 kg) beauty featured in the controversial ad in which she was made to look almost emaciated, with twig-thin hips and no curves whatsoever. But today Filippa claimed that she was fired by the fashion firm she had worked with since her teenage years because they said she was too big.

'They fired me because they said I was overweight,' she said. 'They said I couldn't fit in their clothes any more. Because I was too large.'

The 23-year-old model claimed the move was upsetting because she had had a long-running relationship with the company usually known for portraying a healthy lifestyle.

'It makes me sad. It makes me think that Ralph Lauren wants to have this kind of image - and it's not healthy, it's not right. And it's not a good example. When you see this picture young women will look at this and think it's normal, and it's not,' the model told according to Daily Mail.

Cheat Your Way To Fat Loss (The Right Way)