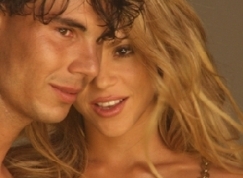 
Rafa Nadal stars in a sexy video clip by the Colombian artist, Shakira...

“I teach you to sing and you teach me to play” Shakira suggested to Nadal and now the tennis player is starring alongside the Colombian artist in a video, titled “Gypsy”.

The pair appear close together and semi naked in a sexy video that is due to be released in March. "Gypsy" is a song from the Colombian star´s latest album entitled "Wolf" which came out in October 2009, and which was recorded in Barcelona in just a day and a half.

Shakira Has No Plans To Marry - Despite Being Engaged!

Shakira Raises $660K To Build Schools In Colombia And Haiti