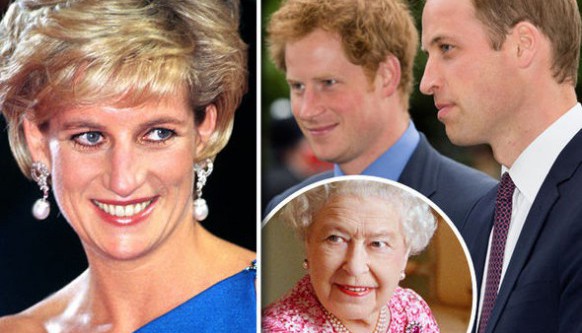 She was a "pretty misfit" who rebelled against the role of princess, but Diana brought the public closer to the palace, and the Queen is finally ready to thank her for it.

As the longest reigning monarch approaches her 90th birthday, close friends say she has laid their private struggles to rest and can reflect on the good the princess did for the Royal family.

It has been claimed the sovereign has realised the impact Diana had on the young princes and through her work against Aids.

A friend of the Queen said: "She felt the pretty girl was a misfit who didn't quite contribute to the things they did and what they wanted her to do in the family.

"There was no real compatibility. Initially, she was sympathetic, but later on, I don't think she felt sorry for her, not really.

"She would never say now that Diana hasn't contributed to the family.

"She sees how much Diana radiates out of William and Harry and the effect they have on ordinary people.

"It is Diana that they see. That sense of fun, that easy way with people."

The Princess captured the hearts of the nation as she knelt down to cuddle orphans and embraced Aids victims all over the world.

Despite being dubbed a 'misfit' in the Royal inner circle, Diana closed the gap between Britons and Buckingham Palace with her world famous work on Aids and her willingness to help those in need.

To the Queen's credit, she has privately conceded Diana was right and the huge strides in Aids research, which have led to drugs that enable its victims to live relatively normal lives, owe much to the Princess drawing attention to the syndrome and breaking down prejudices.

When Charles was bringing the 19-year-old Lady Spencer into the Royal Family in 1980 the Queen was impressed by the match.

Diana was not keen to learn the ways of a princess though, despite people being brought in to help.

Lady Pamela Hicks, daughter of Earl Mountbatten and one of the Queen's bridesmaids in 1947 said Sue (Lady Susan) Hussey, the Queen's favourite lady in waiting, was bought in to help Diana.

But she did not want to be taught, Lady Pamella recalled.

In the revelations revealed in the Daily Mail, Lady Pamelia said: "Instead, she wanted to listen to her music and go disco-ing or to some jive concert. She didn't try.

"She had no need to try because she saw the people admired her. She reckoned she was the star."

And Diana's approach to the staff at the palaces seemed to rile her Royal relatives. Former Buckingham Palace chef Darren McGrady, 52 said: "Princess Diana liked to get away from the family and chat with us about the theatre, and so on."

Diana captured the attention of the media and was pictured almost everywhere she went, but the Queen is said to have accused the princess of courting the cameras.

One friend said the Queen thought it "beyond the pale" with the monarch announcing "I suppose I had better get out of the way" once when the cameras begin clicking at Windsor's Smith's Lawn.

But it was her marriage to Charles, which according to her inner circle, worried the Queen, who wondered what the "Diana effect" would have on the Windsor dynasty. The scars of the Waleses' marriage remain impossible to erase entirely, despite the popularity of William, Kate and their children, and Harry.

And, to her credit, the Queen did her best for her son's marriage, even banning Prince Charles's mistress Camilla Parker Bowles from Buckingham Palace and formal royal functions.

Colin Henderson, the Queen's head coachman in the Royal Mews said: "There was an unwritten instruction that 'that woman' does not cross the threshold."

But the war of the Walses' came to an end when Charles and Diana decided to separate.

In December, 1992, the decision was announced by then-Prime Minister John Major to the House of Commons.

Soon afterward the Princess found herself waiting to see the Queen at Buckingham Palace.

One lady in waiting recalls: "Diana was saying everyone was against her.

"The Queen didn't know what to do. She has always hated this kind of emotional confrontation and, frankly, has never had to deal with it before or since."

In the meeting, Diana's friends said the Queen assured her she would have custody of her sons.

And despite their past differences, the Queen is said to have telephoned her daughter-in-law at Kensington Palace to ask if she was "all right" and kept tabs on her through friends, as well as inviting her to parties and events.

After Charles used broadcaster Jonathan Dimbleby to give his side of the story in an authorised biography, the Queen had had enough of the “ping-pong” battle being fought out in public, Dickie Arbiter, the Queen's former press secretary said.

"My goodness, with the break-up of Charles's marriage and those of the other children Andrew and Anne, she's had a bit of a basinful.

"No wonder she's so close to Edward's lovely wife, Sophie. It upset her terribly that the others made such a mess of their marriages."

The Queen kept a watchful eye on public opinion, but perhaps made her biggest miscalculation when Diana was killed in the Paris underpass in August 1997.

At the time, the Queen was on her annual holiday at Balmoral, and the issue of whether she was right or wrong not to bend to public opinion and rush back to the capital, has never gone away.

The flag above Buckingham Palace took too long to fly at half-mast and public anger grew at her decision to remain in Balmoral.

The Queen has been defended for her decision to keep the young William and Harry at Balmoral, so that when they returned to the capital they had had time to process their initial grief, before being faced with the outpouring of mourning in public.

As for the flag, which was eventually lowered, Sir William Heseltine said: "I have talked with the Queen about the flag decision without asking her if it was a mistake. But I think she would admit today that it was a mistake -- I'm sure she would."