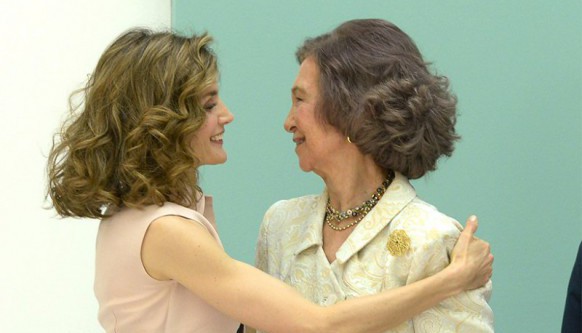 Queen Letizia of Spain shared an affectionate embrace with her mother-in-law, the former Queen Sofia, after presenting her with a trophy to celebrate the 30th anniversary of the Drug Addiction Foundation (FAD), for which Queen Letizia is the president and Sofia is royal patron.

Dressed in a summery, pale pink dress with black laced lining, the Queen of Spain looked elegant and demure while celebrating the foundation's landmark birthday, accessorising the simple yet pretty dress with a pair of cream heels and with her brunette hair in loose curls.

Her mother-in-law, Queen Sofia, looked equally glamorous in a cream paisley suit with a brooch, rings and a stunning golden necklace. The two were pictures smiling and hugging each other after Queen Letizia presented Sofia with a trophy to mark the charity's landmark birthday, as the former Queen was the charity's first patron.

Accepting the award, Queen Sofia thanked her daughter-in-law for the tribute. She said the award "touches my heart," and that during her work she felt "that intimate satisfaction by helping others." She continued to wish Queen Letizia luck in her role as president of the charity, saying: "I wish you good luck…many successes and many years of generous service."

She continued to speak about the FAD, saying that it: "has always been at the forefront of research, supporting all without judgment, without blame, without hurting, without stigmatising, always focusing their energies on preventing, informing and educating."

The president of the FAD, Ignacio Bayón, also thanked Queen Sofia her almost thirty years in service to the charity, saying: "from the beginning [she] joined with enthusiasm to a [job] deemed necessary for society."

During its three decades of existence, the FAD has taken its school prevention programs to more than seven million students, has trained more than five million parents, and has provided care to more than 330,000 people.