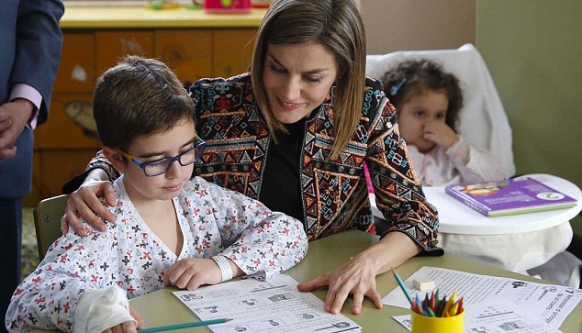 She's known for being a devoted mother, and she once again let her maternal side shine through during a visit to a children's hospital.

Visiting the Nino Jesus hospital in Madrid today, the 43-year-old monarch cut a stylish figure in a smart red single-button coat, which she later removed to reveal a more pared-back ensemble.

She donned a cropped, embellished jacket from Zara, which she had previously worn in December 2015, paired with a dark top, trousers and a pair of black patent Magrit heels.

She arrived without her husband, King Felipe VI, on the official visit to mark the 50th anniversary since the hospital's foundation.

But the Queen seemed perfectly at ease, laughing and joking with hospital staff as she made her way around the building.

She spent a lot of time chatting to poorly youngsters inside the hospital, also helping them out with their homework and admiring their paintings that adorned the walls.

Letizia is mother to Leonor, Princess of Asturias, 10, and Infanta Sofía of Spain, eight. She and Felipe are often spotted out spending family time with their two daughters.

The Queen wore her hair down and swept into a chic side parting for the occasion, with a pair of simple diamond earrings.

She was spotted chatting with companions as she approached the hospital, which is situated on de the Avenida de Menéndez Pelayo, next to the city's Buen Retiro Park.

It is Letizia's second official engagement in the past week, having stepped out last Monday in a collarless Hugo Boss coat as she hosted hosted several audiences at Madrid's Zarzuela Palace.

After becoming Queen of Spain in June 2014, Letizia undertook her first solo engagement as Queen later that month at a modern painting exhibition in Madrid.