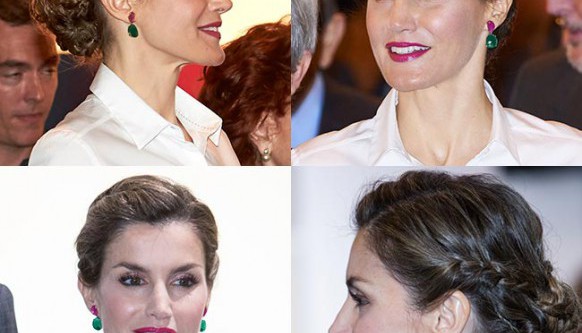 The queen, who is renowned for her effortlessly glamorous updos, wore her glossy brunette tresses swept up into an elegant chignon with a twist – the bun itself was plaited. As Letizia turned her head, she also showed off the two French braids on either side of her middle parting, for an extra touch of glamour to the look.

Ever the fashionista, the 43-year-old showed off her impeccable style, turning heads with her black leather cropped trousers, laced up heels and a white blouse. She added a pop of colour to her already elegant ensemble with an eye-catching pink jacket, accessorising with a matching envelope clutch bag.

It wasn't just her gorgeous braided updo that had beauty addicts coveting Letizia's look - she mastered another of the season's biggest trends adding a slick of pink lipstick to complete the look and complement her jacket, paired with a hint of blusher and soft smokey eye make-up.

The royal couple had initially planned to head to the UK in March to visit the Queen, marking their first trip to Britain since becoming King and Queen in 2014, but they unfortunately had to postpone amid the current political situation in Spain, following the general election in December.

After the election resulted in a hung parliament for the first time, King Felipe VI has been meeting with political leaders in a bid to try and form a ruling coalition government.