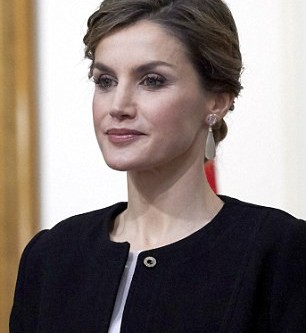 Queen Letizia ignores her critics as she steps out in ANOTHER short dress with her husband at art awards in Seville.

She favoured dowdy suits and frumpy jackets in her years as a news reader, but since joining the Spanish monarchy, Queen Letizia's wardrobe has had quite the makeover.

The 43-year-old mother-of-two's collection of tailored sheath dresses, sky-scraping court shoes and eye-catching jewels is much more daring than the play-it-safe style of the former Kate Middleton.

In recent months, however, royal critics have been quick to note that her style has raised a few eyebrows during her year on the throne, pointing out that she favours much shorter hemlines than her contemporaries.

Clearly opting to ignore her critics, the stylish royal stepped out in another short dress as she joined her husband, King Felipe, in Seville on Wednesday.

The royal couple were putting in an appearance at the Gold Medals of Merit in Fine Arts ceremony at the Bellas Artes Museum.

The Queen recycled her favourite Felipe Varela dress -- the very same one that sparked the debate when she wore it in October.