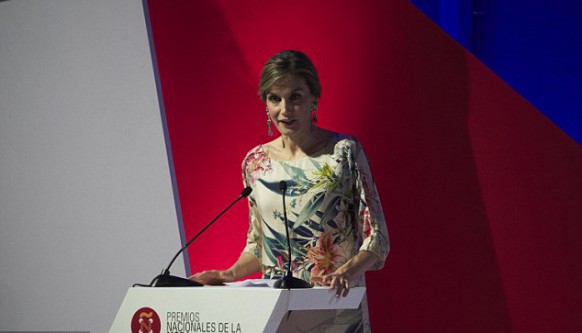 She's regarded as one of the world's most stylish royals with a serious passion for fashion so it's little surprise that Queen Letizia was called upon to host the National Fashion Awards.

The style icon was on hand to present awards to the country's most acclaimed fashion designers on Thursday.

Befitting of the occasion, the 43-year-old monarch looked chic in a white silk dress emblazoned with bold floral prints as she took to the stage at the event.

One gong went to Spanish designer Roberto Torretta, during the award ceremony held at Museo del Traje in Madrid, Spain.

The 43-year-old monarch then joined the other recipients on the stage after making a speech to congratulate them on their sartorial efforts.

Queen Letizia herself is a staunch fan of the latest designers and trends. Indeed, the former TV journalist turned Queen of Spain has carved out a name for herself as a royal style icon.

The 43-year-old once favoured dowdy suits and frumpy jackets in her years as a news reader, but since joining the Spanish monarchy, Queen Letizia's wardrobe has had quite the makeover.