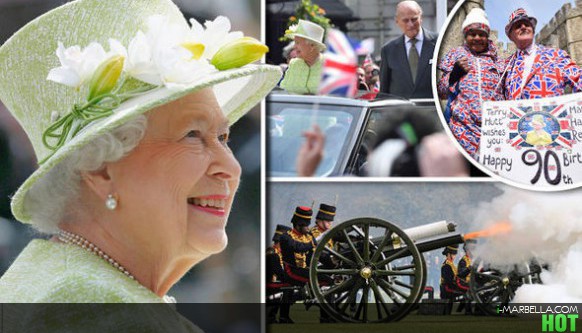 The Queen has arrived to rapturous applause from thousands of cheering well-wishers who lined the streets of Windsor today to wish her a happy 90th birthday.

Hundreds of loyal royal fans cheered as the monarch, who turned 90, stepped from her car in front of the Henry VIII gate.

The pavements were packed with flag-waving, union-Jack wearing royalists all acclaiming the monarch on her milestone.

Her arrival was marked by a rendition of Happy Birthday by the Band of the Coldstream Guards.

A rendition of Happy Birthday and "Happy Birthday, dear Queenie!"erupted from the crowds as the hundreds of well wishers first caught sight of the Queen.

She was accompanied by her husband of more than 68 years, the Duke of Edinburgh, who himself turns 95 in June.

Her Majesty looked elegant in an Angela Kelly citrus green wool and silk weave coat and dress and the hat to match adorned with flowers.

The Queen was driven in her burgundy Bentley through the Advance Gate of Windsor Castle before getting out at the King Henry VIII gate.

The Coldstream Guards band played her Happy Birthday before she started a 100 yard walkabout down Castle Hill.

As the Queen walked down Castle Hill, many people gave her flowers and gifts.

Jim Fairman, 70, from Lightwater, Surrey, was the first person she came to.

He said: "She came to me first.

"I gave her a framed picture of her and Princess Margaret when Her Majesty was 17 or 18 and her sister was a little younger. It was taken against the wall of Windsor Castle.

"I was delighted! She made my day."