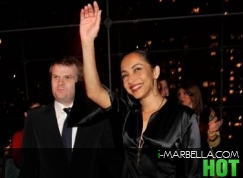 
The Nigerian-born British artist Sade has been seen shopping in Puerto Banus, Marbella during the Marbella Luxury Weekend!

Sade was seen shopping in the luxurious Puerto Banus port. She made some purchases in Michael Kors and even signed her autograph! Helen Folasade Adu, better known as Sade, is a Nigerian-born British singer-songwriter, composer, and record producer. She achieved success in the 80s as the frontwoman and lead vocalist of the Brit and Grammy Award winning English group Sade. In 2002, she received an OBE from Prince Charles at Buckingham Palace for services to music, and she dedicated her award to "all black women in England".In 2012, Sade was listed at number 30 on VH1's 100 Greatest Women In Music. She has a contralto vocal range.

Have you seen her in Marbella?