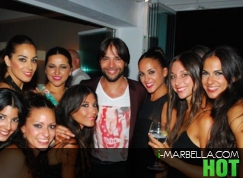 At 1am yesterday morning, Superstar Spanish dance sensation Joaquín Cortés – the man whose stunning contemporary flamenco dancing and choreography has earned him the accolade of one of the top ten dancers of all time – headed to La Sala, Puerto Banús to relax and enjoy a little down time with his dancers, musicians and entourage following a performance of his latest stage show, Gitano at the Tennis Club of the 5-star hotel Puente Romano on Marbella’s Golden Mile.

One of the entertainment highlights of the summer, the charismatic Cortés delighted crowds with his innovative flamenco choreography, modern stage sets and a smouldering performance that left women swooning and shouting out his name as his forceful, exhilarating dancing led him to remove his Armani Jacket and tie and strip down to his soaked black shirt.

Immediately after the event, Joaquín Cortés and his retinue were found enjoying drinks at La Sala Restaurant and Bar in Puerto Banús, the most happening venue in Marbella. The party started straight after the concert and Cortés and friends were royally entertained with live sax, bongos, violin and trumpet, and a spread of delectable La Sala signature dishes and drinks. Despite the rigours of the night’s performance, many of the professionals couldn’t resist dancing sevillanas almost ‘til dawn. Cortés appeared to be in his element throughout, and commented, “La Sala is awesome!”  Many of Cortés’s fans clamoured to the venue to catch a glimpse of the star, following him from his show to La Sala.

Other celebrities to be spotted recently at La Sala include footballer Alex Oxlade-Chamberlain and girl band Little Mix.

For further details and reservations contact La Sala on