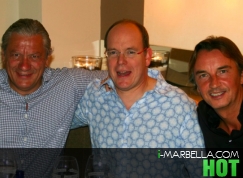 
Prince Albert of Monaco was spotted dining at celebrity hotspot, La Sala Restaurant in Puerto Banus, Marbella on the weekend.

Joined by 12 male friends, Prince Albert of Monaco, who is one of the world's wealthiest royals with a fortune of more than $1billion, enjoyed an evening of Laurent Perrier Champagne, fine cuisine and live music. La Sala has become renowned for its celebrity clientele with guests including Jamie Oliver, footballers Tim Krul and Alex Oxlade Chamberlain, Kim March and Harry Redknapp all visiting the popular eatery in recent months.

The group then continued the party downstairs in Sala Group´s super-club, Aqwa Mist, where the champagne continued to flow. Since its inauguration earlier this year Aqwa Mist has attracted an array of the rich and famous including Eva Longoria, Amir Khan and international superstar Tinie Tempah who performed an extended set at the nightclub this summer.